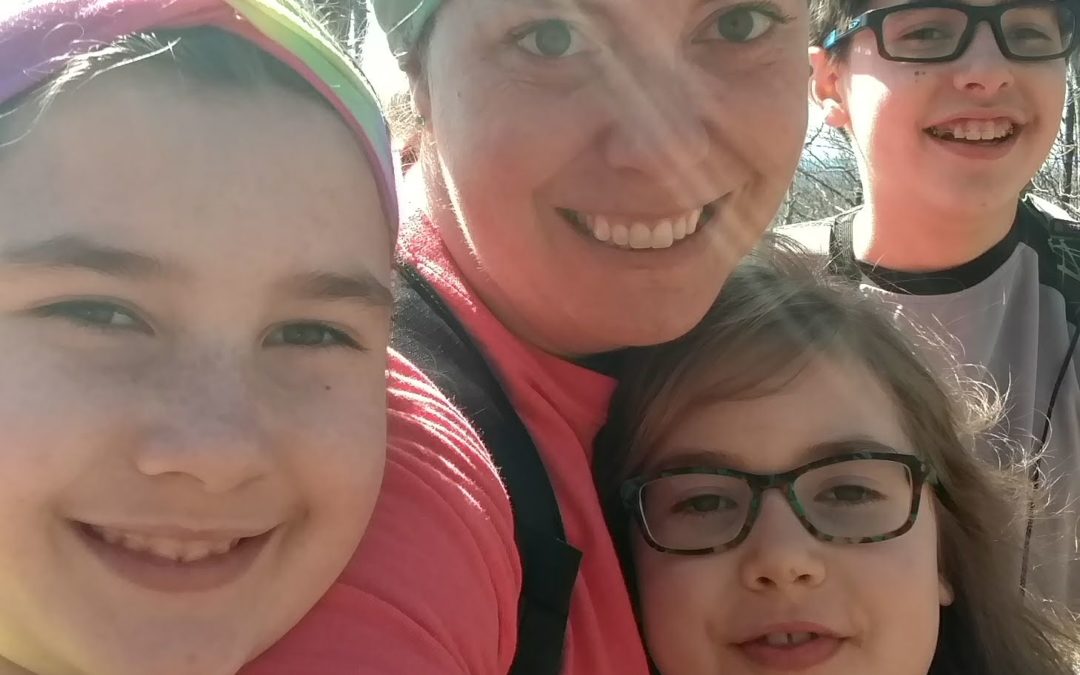 A week or so after Jeremy’s memorial service, I decided I needed to take the kids to the mountains for a hike. It was something that Jeremy and I loved to do. He loved the mountains. When it came to vacation time, he would have opted for the mountains rather than the beach every time. I tried to make our big vacations at the beach, but weekend getaways were in the mountains for him.  Hiking didn’t happen too much over the last 14 years, just because the littles were, well, little.  Our hikes or rather walks were usually easy when we ventured out as a whole family. We were just starting to come to the age with all the kids that we could do little more adventurous hikes because they could keep up. No more having to carry anyone halfway through our excursions or listening to an excessive amount of whining that feet were hurting. As I combed through my hiking app in preparation for our adventure, I scrolled through different options and finally came up with Wolf Laurel Top AT. It said “moderate trail” and I questioned if it would be too much for them, memories of past complaining coming to mind. I decided to ignore those memories and go for it. I mean, why not??? I am a glutton for punishment, right?

Heading to the mountains!

The kids were excited to get out and do something different. The previous five months had been a lot of isolation among all the other things they had to cope with a terminally ill parent. As we approached our destination on the windy mountain road, we started seeing frozen ice waterfalls along the way and I was glad we had brought layers for clothing. It was going to be definitely colder up there.  We parked in a small parking lot on the side of the road and got ourselves situated for the unknown hike ahead. 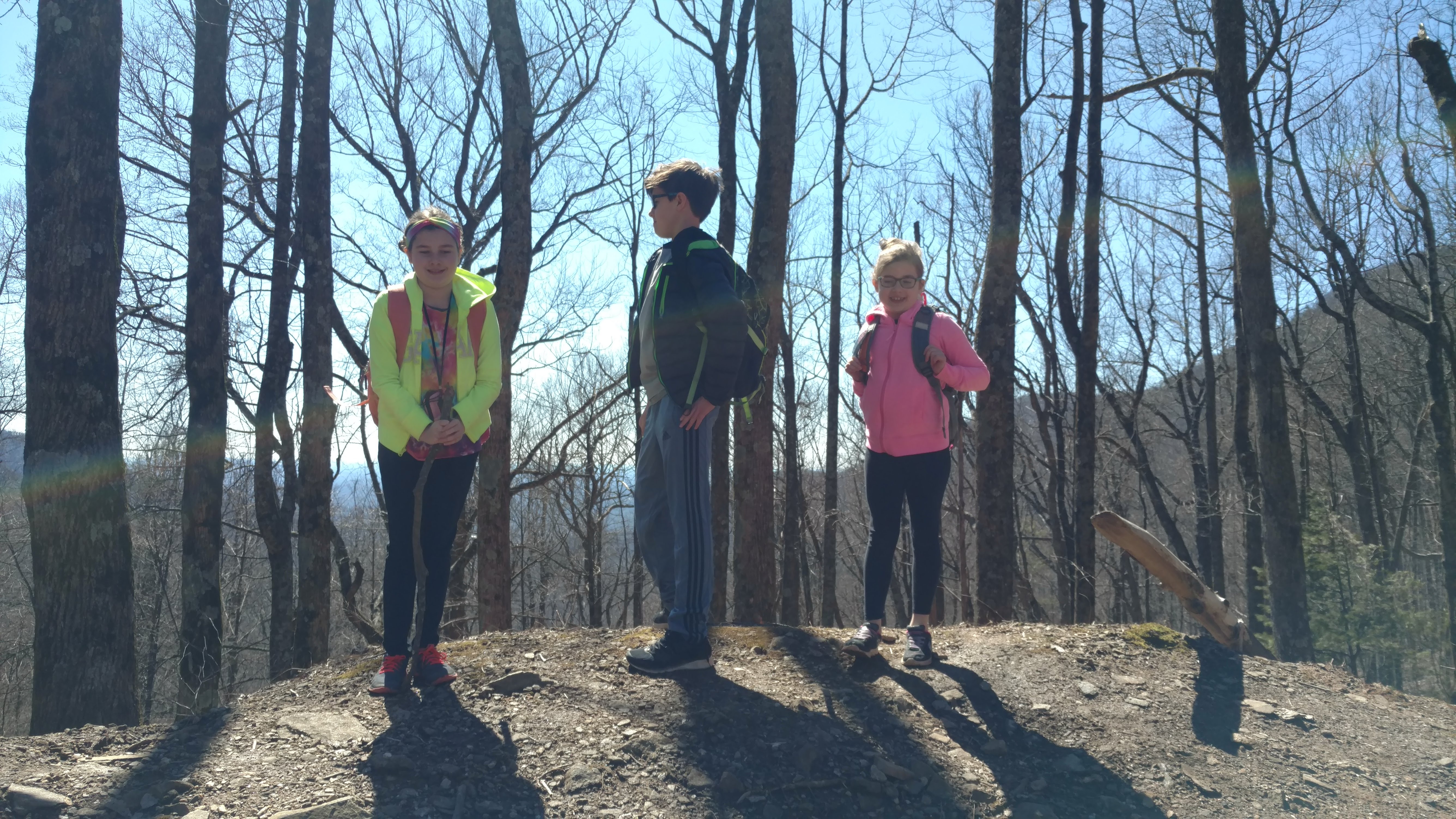 Once all shoe laces were properly tied, sweatshirts and hoodies put on and back packs strapped to our backs, we took off…up a very steep incline.  The air was crisp and clean and it felt good pulling it into my lungs while working leg muscles that hadn’t been used in a long time. The kids ran ahead of me despite the incline. About 100 feet into our climb,  I was reminded that I had read comments saying the first part of the hike was a bit intense, but eventually it would even out. As we plugged along the continuous uphill climb, I would come to a point and think, “Surely this will even out up at that bend”, to only find that it was yet another switchback with the same incessant slope upwards. Yup, I had read about that in others comments on the trail app. They weren’t kidding. 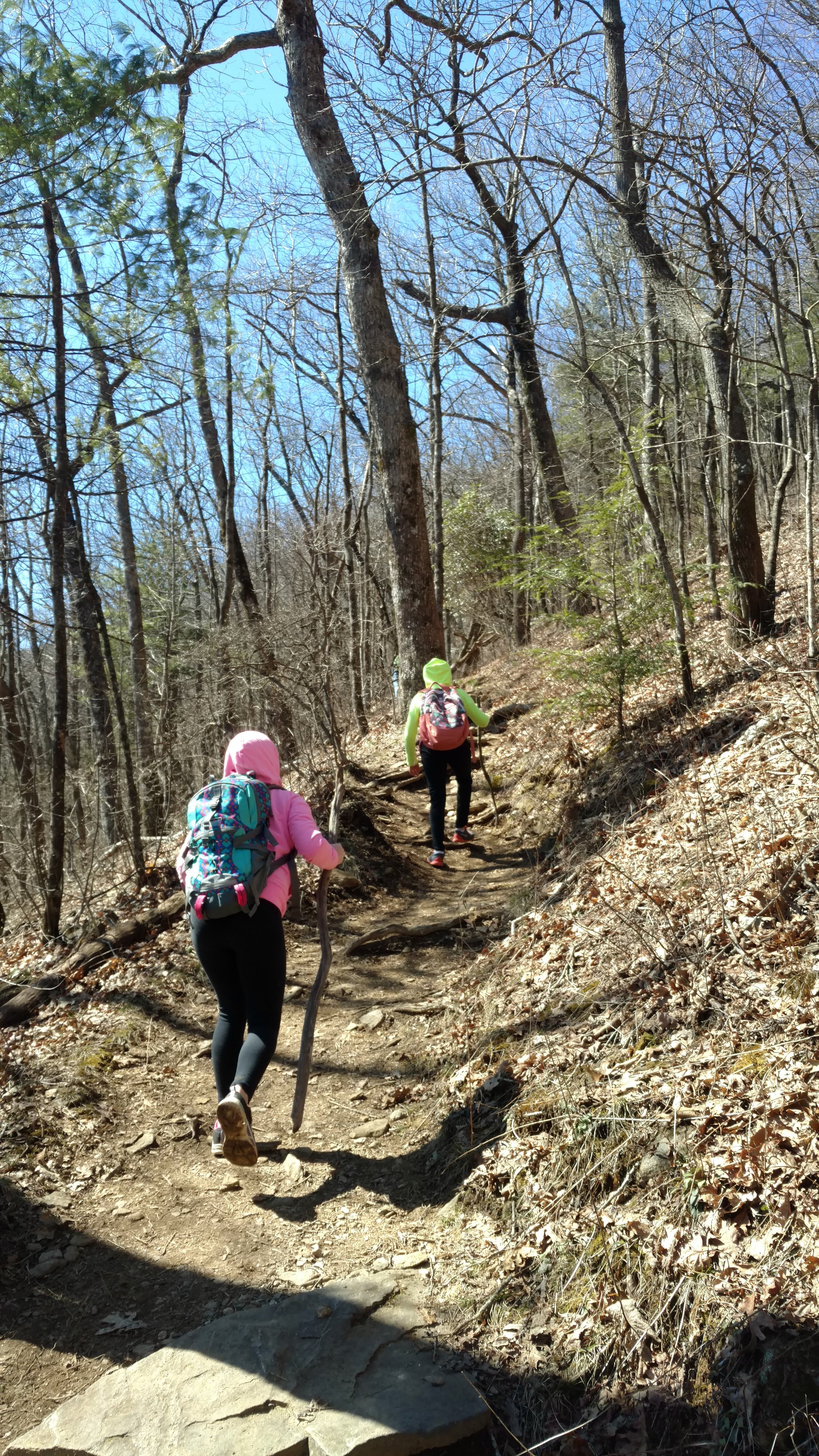 And then there was the mud. Every once in a while we would hit a patch where the path was muddy from the previous day’s rain. I would have to strategically watch my step to avoid falling flat on my face.  I have to admit there was at least one time that I thought I was going down, but managed to keep myself upright. Felt a twinge in my back that time and carried that feeling with me through the remainder of our trek, while thinking, “I probably need to make an appointment with the chiropractor tomorrow.”  Funny, I also remembered someone making a comment about the mud on that app. I had been warned that we might run into it.

At one point, we saw two men coming back down the mountain and as we approached them it seemed that had gotten off the path and were climbing down a rock to get on the path that we were on.  I remember thinking, “Why on earth are they doing that? Why would they choose a harder way?” We passed them and said hello, but we kept walking. But all of a sudden, the path stopped out of nowhere before us. The four of us just looked at each other, and the kids looked to me to tell them where the path had gone. I looked around puzzled, trying to figure it out.  Until one of the kids remembered the men, went to where we had seen them come down and realized that’s where the path actually was. It was above us and and not easy to see. Had it not been for the men and their example, we may have been looking around a little longer, with a lot more confusion. No one warned me about that in the app, but was grateful that at the right moment we saw others navigating the path to know what to look for when we lost our way.  So while holding onto the tree next to the path, we hoisted ourselves up and went on our way.

We plugged along and it didn’t seem like the incline was going to give up. Several times I had to call ahead to my bookends, who seemed to be scaling the mountain a lot easier than me, to hold up and let their old mama catch her breath. My lungs were hurting and my heart was beating hard. I HAD to stop. I physically could not go on. My middle child seemed to be always sticking not too far from me. She admitted to me that it was a hard climb, but I know she was keeping an eye on me not wanting to stray too far from me. Maybe it was for comfort for me or maybe reassurance for her. Maybe a little bit of both. At some point along the way, she had  grabbed a branch and was utilizing it as a walking stick to help her navigate the path and I realized she didn’t have a bad idea there. Eventually we came to a clearing and the incline evened out a bit and we were given a reprieve and we all sighed with relief.  But only for a little bit. Eventually we started climbing again.  My two that seemed to have boundless energy seemed to start slowing down a bit. We passed other hikers and they encouraged us to keep going because we weren’t far from a rest ahead. We plugged on and sure enough we came to a vista view that took our breath away.

It was beautiful and peaceful and breathtaking. HE would have loved this. I could picture his face and what it would look like as he looked out over the mountains. I had seen that look many times. It was like he was at home there with those mountain top views, at peace. He would turn and look at me and smile with this unique light in his eyes. What I felt as I sat there was a strange feeling. There was a soothing peace that came over me and my heart, but yet there was this ache that crept in.  It felt like an oxymoron… if oxymorons had feelings. How do you feel peace and grief at the same time? I don’t know. But I felt it there. I know it is possible. 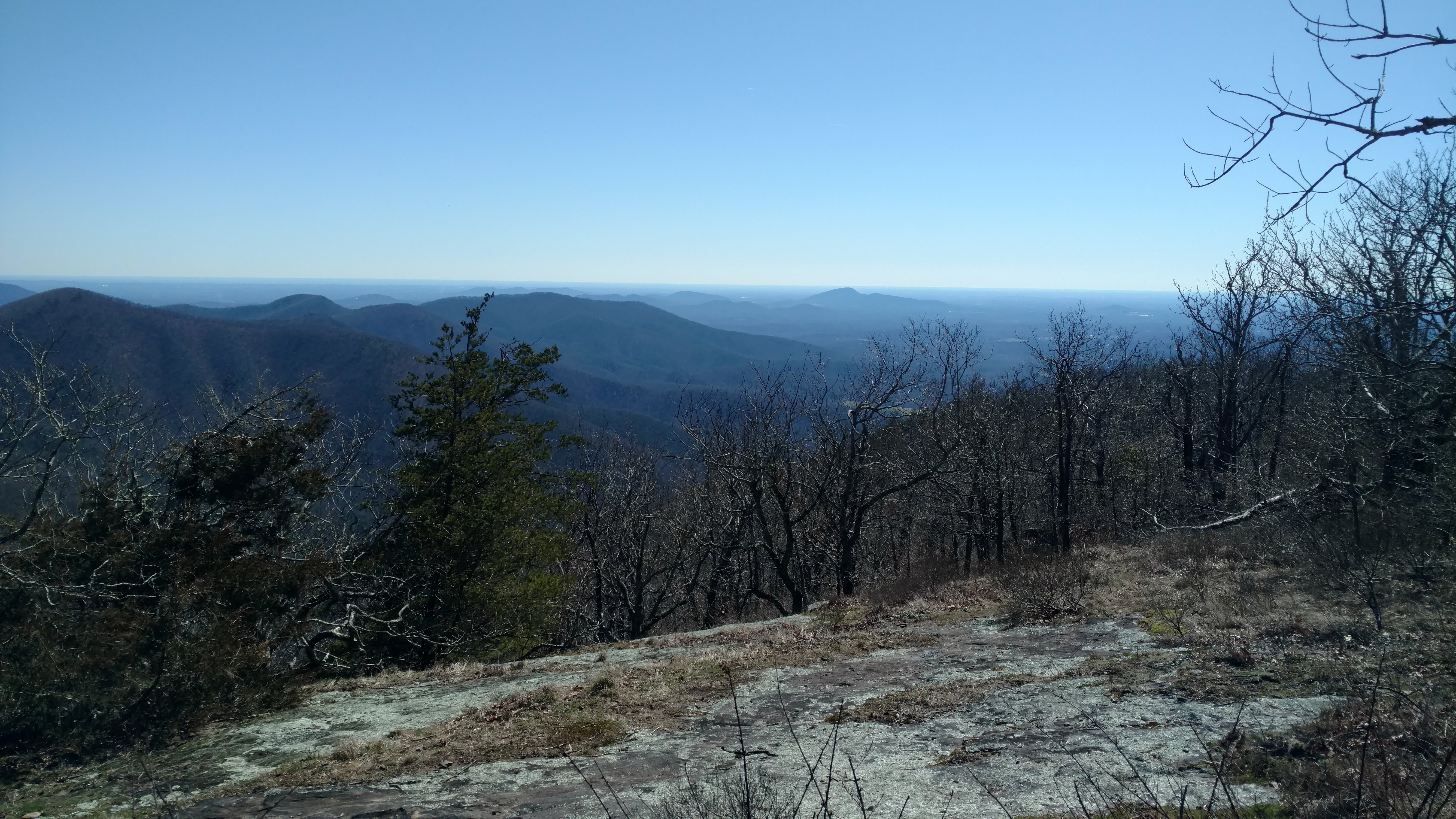 A week or so later, after taking a shower and getting ready for bed, I stepped out of my bathroom to find two little girls curled up in my bed. The younger one was lying on her Daddy’s side of the bed with a perplexed, lost look on her face, fiddling with her hands. I looked next to her to see her older sister with tears streaming down her face. I didn’t need to ask what was going on. I knew. I climbed onto the bed and sat myself in between them and pulled them into my arms. I listened as my older girl poured out her heart through her tears and share the thing that triggered the broken dam of emotions. When she was done letting it all out, I reassured her what she was feeling was normal. I acknowledged that it felt yucky and horrible and just…ugh. But I also told her that from what people had been telling me, that this was the hard part. That one day it wasn’t going to hurt so badly. That in the beginning it was supposed to be difficult and seem continually hard. And it wasn’t that it wasn’t going to hurt later or that we weren’t going to miss him, but it wouldn’t be as hard as it is right now. This beginning part of our journey without Daddy was going to be the most difficult, trying to figure out how to do things without him physically present. And as I held them close, the younger one pressing herself into me more, the older one pulled her head back and looked up at me with her beautiful brown eyes so much like her daddy’s and those freckles spattered across her nose so much  like me and asked in a small voice filled with understanding, “Like that mountain we climbed?”

My breath caught. And with the realization of the wisdom coming from my sweet girl, a smile spread across my face and tears welled up in my eyes. 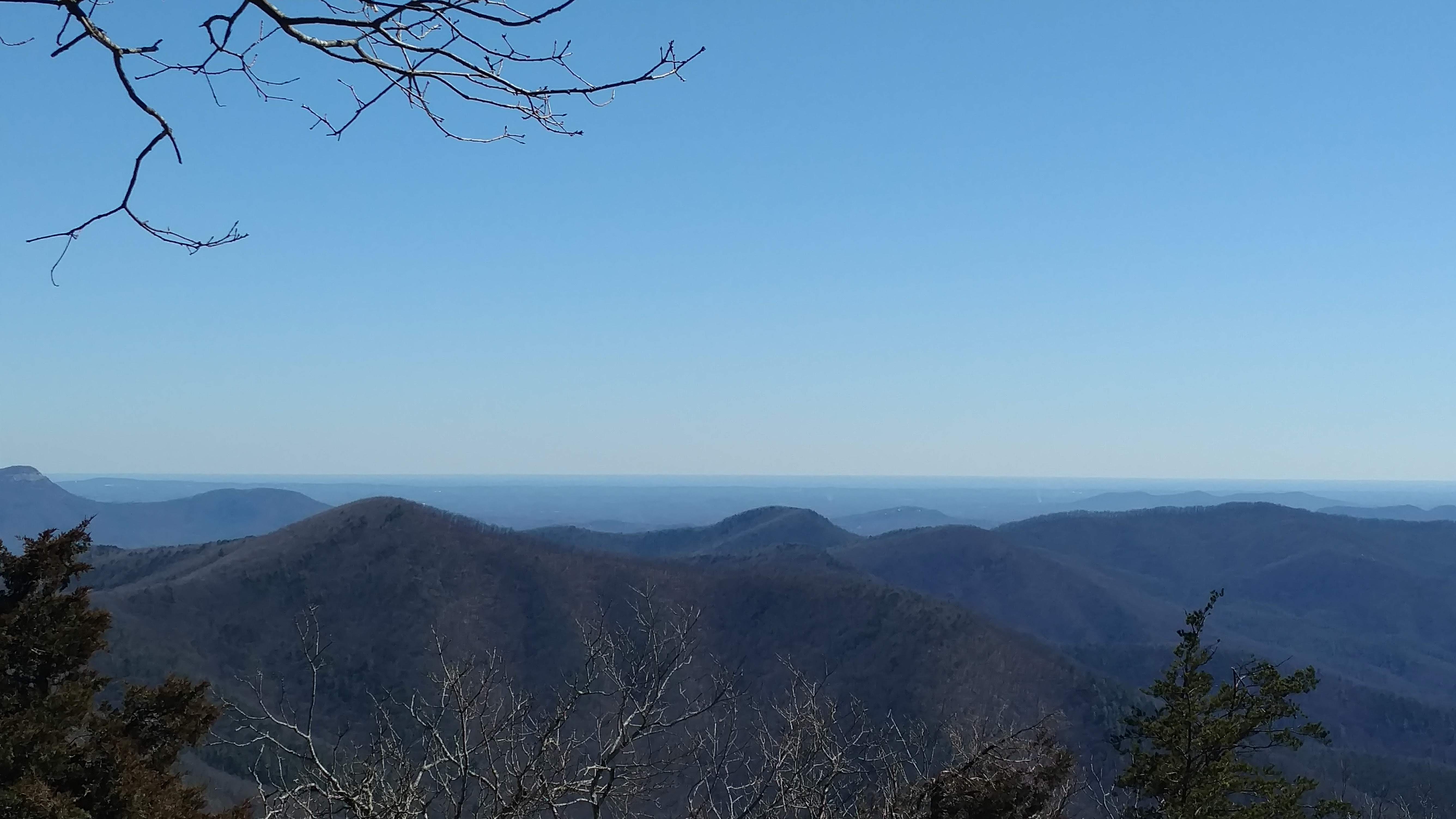