What’s in a Picture

I love this picture. And it isn’t because, having just left Colorado where humidity is non-existent, my hair was on point. There is another reason. Or rather, reasons.

We were driving from Denver and heading to the Grand Tetons in the northwest of Wyoming. We had just gotten into Wyoming and I realized that I hadn’t put the actual campground’s location into in my GPS. I had just plugged in Grand Tetons. Um…the Grand Tetons are kinda, well, grand. I probably should have been more specific. I realized my mistake and cleared out my directions only to then realize I had made a bigger mistake. My data wasn’t working (I realized later I had hit a button that had turned it off) and there was no cell service. I could not pull up ANY directions. So there we were… in Wyoming, headed in the right direction, but completely without directions.

What was I to do? Well, keep heading in the direction I was going, right? I wasn’t on an interstate but rather on backroad highways. As I drove along, I just shook my head at myself. Why do I do things like this to myself. All. The. Time. I did have some feelings of apprehension, but I got to a point where I was like, “Ok God. Could you help us get there? Cuz I really don’t know how to get there. I have an idea but I know there are turns up ahead and I won’t know which way to go.” It is as if I held my hands open and was open to whatever was before us, believing that we could get to our destination even if it wasn’t clear how.  I knew I had to pay attention and be aware of my surroundings and even possibly ask directions along the way because I still had to get us to the Grand Tetons, but  I  had let go of the angst of making that happen.

Despite knowing I was going in the right direction, but NOT knowing if I was going in the right direction, I was still able to take in my surroundings. There were so many times that I wished that I were the passenger so I could take pictures. The landscape changed so often. The clouds passing over the hills in the distant continually changed their appearance. The sunlight sparkling on the rivers running through the range made the waters dance and make me want to pull over to sit by them…or jump into them in an attempt to be submerged or capable of gathering up and holding their beauty. Driving and coming up to a sign that read the Continental Divide, to cresting the hill and seeing a vast basin that we were about to drive into, it took my breath away. So did the wind as it tried to shove my truck and camper around. I was incredibly grateful I had the sway bars put on before leaving town.

Then out of nowhere, there was a small brown sign that said “Yellowstone” with an arrow pointing left.  I almost didn’t see it. So much so I had to question if it had seen it and was I supposed to turn left? I mean Yellowstone connects to the Grand Tetons. Thankfully, there was a gas station right at the turn so I pulled over to give the kids a potty break and to see if I could get some directions.  I walked into the gas station to find a man who had to be at least ten years younger than me, sitting behind the counter. I told him my situation and he responded, “Well darlin’, come on over here,” as he directed me to a huge map on the map covered in pins. As he traced the route with his finger, while calling me “darlin’” every other sentence, I wanted to laugh. I could feel it starting to bubble up in me. Delirium? Maybe….but I don’t think so. I think it was joy. Here I was, a single mom trying to provide good memories for my three kids after months of a lot of really bad stuff, out in the middle of the country, in the midst of a global pandemic and in a national state of intense social and racial unrest, completely lost, being helped by a kind man,  who kept calling me “darlin”.  It didn’t make sense, but I felt held. I felt safe in what shouldn’t have felt like a safe situation. And I was feeling something else.

I got back in the truck and headed in the direction I was shown to go. Again, I kept getting caught up in my surroundings and it’s beauty. The way the light changed the landscape’s appearance. That sky. That big, big wide-open sky.  I realized my heart was feeling light.  Something I hadn’t felt in a long time.  I had to get out of the truck and take a picture to try to capture the memory of what I was experiencing in that moment. I pulled over on a pull out to take a selfie. The wind playfully whipped my hair around, making it hard for me to take the picture. I laughed. I felt light. I felt giddy. Again, delirium? Had the intense demands and events of the past months sent me over the edge?  Some may argue, yes. But I say no. It was the letting go of the weight of the circumstances that surrounded me and embracing the good… the journey. At least in that moment I was. That’s what I see when I look at this picture. I remember that feeling…feeling light and free.

I also see my kids’ response at watching their mom finding joy in the moment.

When I hopped back in the truck, I heard giggles and saw big happy smiles. One of them even remarked, “Wyoming makes you crazy, Mom!” as they laughed. It did their hearts good to see their mom truly embracing the moment. My kids needed to see Mom joyful. Not just happy and laughing, but joyful.

I stopped one more time and received some help from two gas station workers and a gentleman who had just left the Grand Tetons after camping for a couple days. The gentleman even gave me a heads-up on an incredible app for the Grand Tetons and Yellowstone National Park. And guess what? Despite losing my road map, we made it to the Grand Tetons… and with more knowledge and an incredible experience had I not lost it. I did miss the entrance to the Grand Tetons at one point, but it just took me on the other side where we got to stop and see a large herd of bison. And further down the road, we got to see a young couple exchanging their marriage vows as the sun was setting behind the majestic Grand Teton mountains. That scene gave me pause. I wonder if they knew and understood the vows that they were taking. I wonder what their story would look like in the coming years. What pain and joy would they experience? But… I will never know. 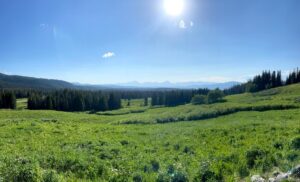 Once I realized I had missed my turn, we turned around (at that couple’s wedding ceremony actually). We were set back a little, but we still made it to our destination and all was good. 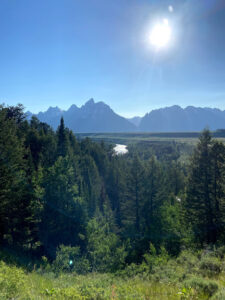 So, when I look at this picture of me, I don’t see just the hair in my face and me trying to see through it. I see so much more. I see the journey. I see the “despite” in the situation. I feel the light heart. I feel the joy. I see my kids’ smiles and the joy on their face as they take in their mother’s joy. I see the state of being lost but actually not being lost at all. 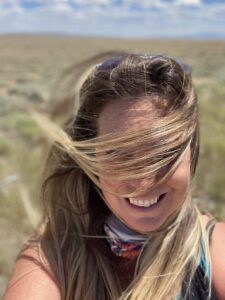